Plaza Mayor is the square which the main hub of the government surrounds. The Cathedral, Government Palace, Aliaga House, Monastery of St Frances are all on or within walking distance of the square.

The cathedral is just across from the mayor’s office and kitty corner to the president’s office. It was enormous with beautiful vaulted ceilings and a magnificent altar. There were many side altars as well that were pretty amazing too. Our guide told us the story of Pizarro and how his real body was discovered several years ago and replaced the “imposters” that was on display. Apparently he was buried missing his head...

A short walk away is the Monastery of St Frances which was huge with lots of tiles from Seville and cedar wood from Central America. While we were not allowed to take photos, there is a lot of restoration work that is ongoing. The courtyard looked nice but was blocked off so we only got a peep. They had a painting of the last supper with guinea pig, a round table, and the devil breathing down judas neck, literally. Then we went down in the first level of the catacombs; there are three levels. They stack the bodies 8 at a time in a pit with lye in between for faster decomposition. Then every 4 years they would dug out the pits and move the bones to big 30 foot deep wells where they are arranged in a spoke pattern for better packing.
Read More 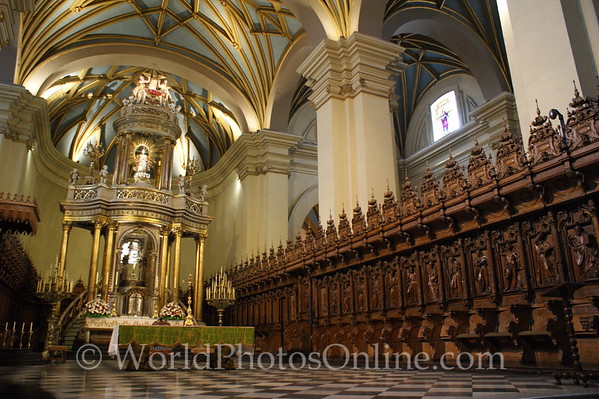