During our trip we stopped at the village of Cedro Isla for a tour and spent some time in a local house as well as the school. There were wells, sidewalks, 2 satellite dishes and systems and a school that was supplied by the Peruvian government. However the well water had a high iron and alumina content that was not healthy to drink and was only used to wash clothing. They still drank river water. The sat systems were both not working, since the government only covered the installation, but not the maintenance. They did have a small solar electric system charging car batteries which I guess was used to light houses at night. The house we visited had electric light and an outlet strung up that was run by a diesel generator, but was expensive to run so was only used for special occasions. The house had several rooms including a kitchen with a fire grill that was on a clay bed to keep from burning the house down. Our guide (Uceal) told us about life in the village and how they lived. The school was one room concrete with a single teacher that was supported by the community. The kids all came out and sang a song, then went through their and our names (with us asking in Spanish) and we sang a song as well. We left the school supplies that we had brought with the teacher to distribute as needed.

In the Amazon, the average age of marriage is around 16, with 7.2 children per family. Iquitos the average family is 5.1 children. Marriage proposals are very practical. The girl asks to see the boy’s machete to see if it is sharp and if he has his own dugout, a sign that he is a hard worker. In the past raiding parties between different villages insured there was not much inbreeding, but now it is football (soccer) where the boys and girls meet. They will move to boys or girls village, there is no tradition on who moves where.
Read More 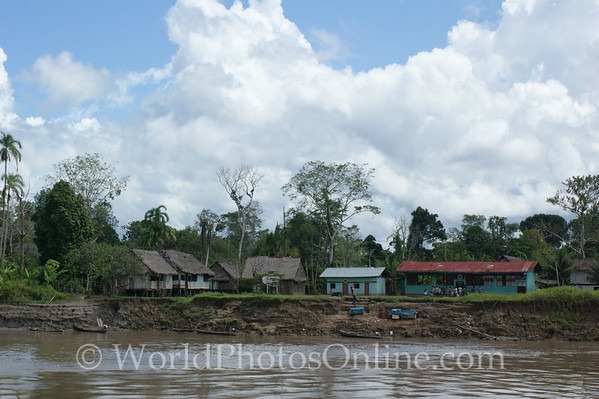